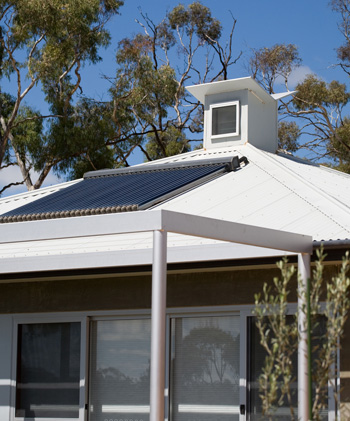 Even as a child Ric Butt had an inquiring mind, a driving curiosity to understand how things worked. Coupled with his passion for Australia’s environment, it is no surprise he established Australia’s first firm dedicated to environmental design, and that he took the innovative step of improving environmental architecture to suit Australia’s extreme climates, and in particular, that of the Canberra region.

“‘I think I was put on to passive solar design by my grandmother. She lived in an 1838 stone house in Yass and it was sometimes colder inside than outside. In the 1930s, she would go and sit in the car in the sun in the backyard which was her sauna. I remember in high school trying to work out what is the science that made that work? ‘The car is the classic heat pump; it’s the glasshouse effect. Short wave radiation from the sun penetrates through glass where it, converts to long wave radiation and can’t escape, as glass is opaque to long wave radiation.

The heat is trapped inside. Energy comes in and can only get out by conduction.

‘So that’s how our passive houses work. They are like a heat pump. But unlike the car that loses all that heat overnight, because of the thermal mass we build into our houses, they retain their heat overnight.’”

Personalise your very own green home

Discover some of our green factsheets

Ric is an architect, builder, environmental designer and the principal of Strine Environments. He is committed to raising the public profile of vernacular Australian architecture and promoting environmentally sustainable practice in both design and construction.

Ready to have a conversation?